Get fresh music recommendations delivered to your inbox every Friday.
We've updated our Terms of Use. You can review the changes here.

A Ruthless Criticism Of Everything Existing 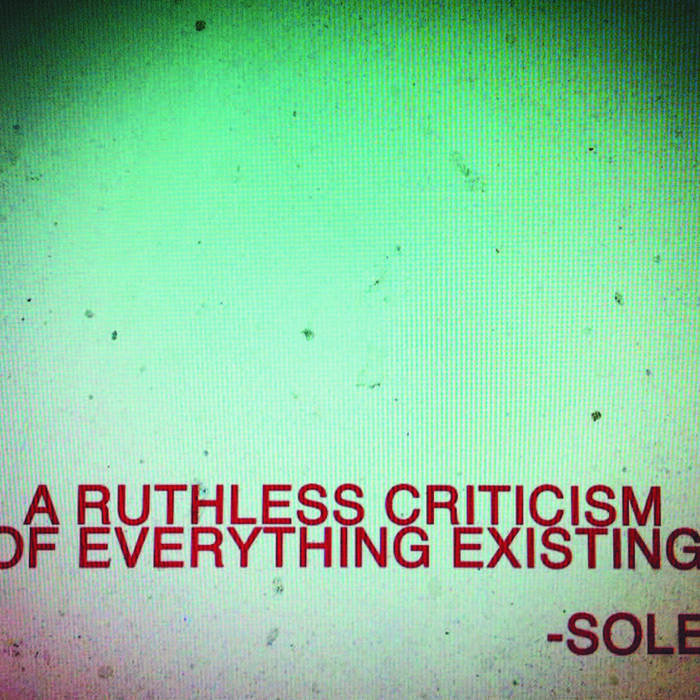 Junko78 (a night on canopy)

"A Ruthless Criticism Of Everything Existing"

A Ruthless Criticism of Everything Existing is the culmination and logical progression of all the various aesthetics and approaches I have cultivated over the years. This album is at times sarcastic, belligerent, serious, poetic, and abstract. I rap about rappers, I rap about the empire, I rap about capitalism, labor, alienation and the environment. I offer critiques, I offer solutions. Sonically, this album bounces between classic hip hop, electronica, & experimental dance, traditional song formats and tracks that barely resemble songs. When I think about the artists that inspire me, I look to Pete Seeger, Chuck D, and Godspeed You Black Emperor; musicians who never let the immediate needs of the market dictate what they created.

Like many that came before it, this album holds dear the Situationist notion that art is only doing its job when it's challenging the status quo. Unlike much music that has emerged under the banner of Occupy, this album was written from the perspective of someone on the ground, organizing, dealing with state repression on a daily basis for almost a year. The lyrics express the P. T. S. D. and emotional trauma of the class war. A Ruthless Criticism Of Everything Existing is written from the perspective of a white radical, unapologetically wanting to watch the old world destroyed to see a new one born in its wake, this time with new tools and a new framework.

A lot has changed since my last solo album Live From Rome. I left ant E con, the label I founded with the Pedestrian, and took 100% control of my masters. I spend less time touring, and more time reading, gardening and working on random activist projects around Denver. In 2007, I formed sole and the skyrider band. We made 3 albums, toured sporadically, until finally going on hiatus in 2011. Around 2009, I launched a series of "mainstream" rap mixtapes called Nuclear Winter, which took popular songs and transformed them to reflect more radical, critical and often contrary themes than the originals. Between those projects, I continued to hone my production skills with the more experimental project "mans best friend." Sometimes I go half a year without making a song, sometimes I'll record three songs in a day. When you work for yourself you do what the fuck you want, when you want, when you feel so inspired.

In the past year, I watched the world slowly awaken from a nightmare, a nightmare that I have documented throughout my career, with a growing sense of urgency. I have never made a love song or rapped about drugs. I have tried to maintain my ethics in an industry that is hostile to them. The nightmare still reigns, and time will tell if we are put back to sleep.

Quelle Chris joins the show to discuss his most recent release, "DEATHFAME"